In 1996 Dennis and Cindy Thompson established the Gypsy Vanner Horse Society. To understand the importance of the Thompsons’ work, and this breed, one must know that hidden behind shrubs and under bridges; amid the indiscriminate breeding practices that had caused the world around the Gypsies to see any horse bred by them as nothing more than trade horses for consumption; a breed had been developed and its story begins here:

Founded November 24, 1996, the GVHS is the world’s first registry to recognize a breed of horse developed by the Gypsies of Great Britain/Ireland and the only such registry founded on an in depth study of British/Irish Gypsies and their horses.
All breeds result from a crossing of breeds by someone or some culture focused on creating a specific looking horse born from their dreamed image – their vision. Once the ideal horse is achieved and recognized, the basic function of a breed society is to protect, educate about, perpetuate and promote the breed. With our breed and the magic it holds, the opportunity is greater.

Soon after World War II, a vision was born by the Gypsies of Great Britain to create the perfect caravan horse; “a small Shire, with more feather, more color and a sweeter head” was the goal. Selective breeding continued virtually unknown to the outside world for over half a century until two Americans, Dennis and Cindy Thompson, while traveling through the English countryside, noticed a magical looking horse standing in a field. It was that very horse who became the key to unlocking the heretofore-unknown vision and genetics that created the Gypsies’ “vanner” breed (a horse suitable to pull a caravan). Be it good fortune, good luck or pure Gypsy magic, a passion was born in the Thompson’s to understand the little stallion that captured their attention and stole their hearts. It would take years of research – without the help of the Internet – to learn about this special horse and, just as importantly, the colorful culture, which had created it.

Invited by the stallion’s owner, the Thompsons attended Appleby, (the oldest horse fair for Gypsies in the world) with the sole purpose of developing a better understanding of Gypsies and their horses. For ten days they introduced themselves to every Gypsy who bought or sold a quality looking horse and then documented contact information for later pursuit. The discovery of that one special little stallion and ten days turned a curiosity about Gypsies and their horses into an obsession. – Dennis Thompson, GVHS Co-Founder

The Thompsons’ relentless pursuit of knowledge over four calendar years resulted in:
• Uncovering the post World War II vision from which the breed was born.
• Identifying “Sonny Mays” and “The Coal Horse” – the two foundation stallions that inspired the Vanner breed – as well as much of the     influential  stock originating from those two.
• Identifying the genetics that created the breed: The Shire, Clydesdale, Dales Pony and Friesian.
• Tracing the genetic heritage of “Cushti Bok” (the stallion they had discovered) through three countries.
Discovering that, as a yearling, Cushti Bok had been “the most highly prized colt in all of Great Britain” at the same 300-year-old horse fair where their quest for knowledge began.

• Naming the unnamed breed “Gypsy Vanner Horse”.
• Documenting the Vanner breed standard based on years of listening to the spoken words of dedicated Gypsy breeders. Respecting the spoken words of Gypsies who have dedicated lifetimes in the pursuit of their dream is a commitment of the GVHS mission contained in its by-laws. Breed Standard
• Writing the mission statement of the Gypsy Vanner Horse Society.  Mission Statement
• Developing the four goals of the GVHS.  Goals
• Importing the first two Vanner fillies (Bat and Dolly) November 24th 1996.
• Importing the first two Vanner stallions (Cushti Bok and The Gypsy King) Easter Sunday 1997 and Easter Sunday 1998.
• Importing a total of fourteen mares and two stallions for the breed’s introduction in June of 1998 at Equitana USA in Louisville Kentucky and on the Internet. All other names and efforts to recognize a breed of horse developed by Gypsies throughout the world came after.

A MESSAGE FROM THE FOUNDERS
Returning from our fateful trip, Cindy and I sat on a plane contemplating the absurd possibility that we may have just stumbled upon an unknown breed of horse in the last decade of the twentieth century.  As wildly improbable as it seemed, consequent research confirmed that, in fact, one of the most magnificent breeds of horse the world has ever seen was not recognized, did not have a name and was not understood outside the world of Gypsies.  I cannot explain or express deeply enough the sense of responsibility that reality brought with it.
The mission and goals of your society were inspired by that sense of responsibility and a sincere desire to establish the magical looking breed Gypsies created without changing a thing.

Below is the very first issued Registration Certificate for the Gypsy Vanner Horse Breed; with this action a new breed was officially recognized and the recording of the horses within that breed began:

A Tribute to Fred Walker 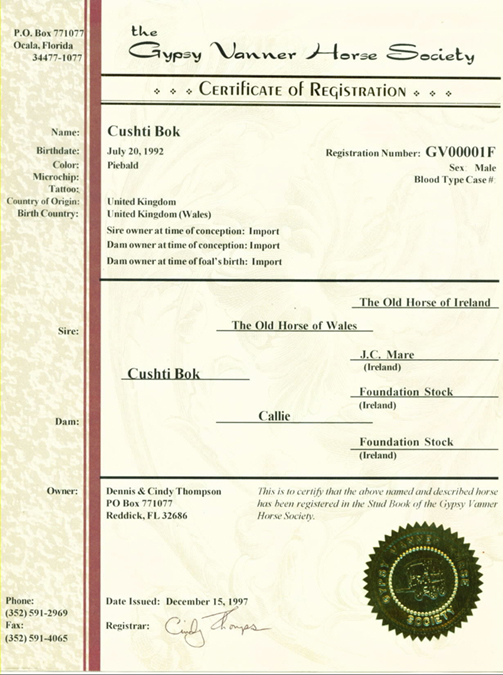